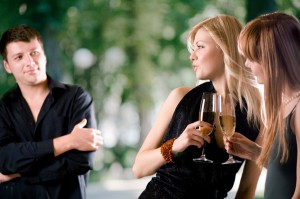 Pick up lines have been very popular in the dating world. While its onset was years ago, its trending phenomenon has only been witness by men and women of this decade.

Some witty and wise pick up artist derived various lines from famous people and made them the ultimate chat-up lines to pick women.

Adam: Let’s hide from Mr. Nosey up there, and have some fun. What’s the worst that could happen?

Noah: There’s room for one more!

Homer: Date me, or I’ll bore you to death.

Socrates: Date me, or I’ll confuse you to death.

Plato: Date me, or I’ll prove you don’t exist.

Alexander the Great: Do you know that I’m often called “The Great”? And I have no idea what the men call me, heh, heh, heh.

Michelangelo: I feel like before I met you, everyone I’d ever known was made of stone.

Martin Luther: Haven’t you heard? Turns out we wouldn’t have to go to confession at all!

Galileo: Other men may tell you they can bring you the moon. But look through this.

Sir Isaac Newton: Tell you what: You date me, and I’ll let you borrow my wig.

George Washington: I cannot tell a lie. Martha is my sister. From Nevada.

Benjamin Franklin: You know, in France I’m considered quite the catch. I am, too! Stop laughing.

Napoleon: My dear, I could bring you the world on a platter. Seriously. By, like, this Thursday.

Abraham Lincoln: I know when you look at me, all you see is my gargantuan nose, ears, lips, chin, cheekbones, and eyebrows. And my Amish beard. And my stovepipe hat. And my mournful expression. And my ill-fitting clothes. You know what? Forget it.

Sigmund Freud: As far as I’m concerned, there’s just you and my mother–I mean, and no other.

Thomas Edison: I know you’ve never heard this phrase before, but trust me: You turn me on.

Albert Einstein: I know this sounds crazy, but I’m late for an important awards ceremony. Do you happen to have a comb or hairbrush on you that I could borrow?

Pablo Picasso: So, here come do often you?

Mahatma Gandhi: I’ve been watching you watching me. And I think we both know that, deep down, you want to rub my head.

Winston Churchill: I’ve been watching you watching me. And I think we both know that, deep down, you want to rub Mahatma Gandhi’s head. I can arrange that!

Now that we are discovering the realms of contemporary dating, be different and stay away from those typical pick up lines.  Be creative and put a historical spice to your pick up lines.